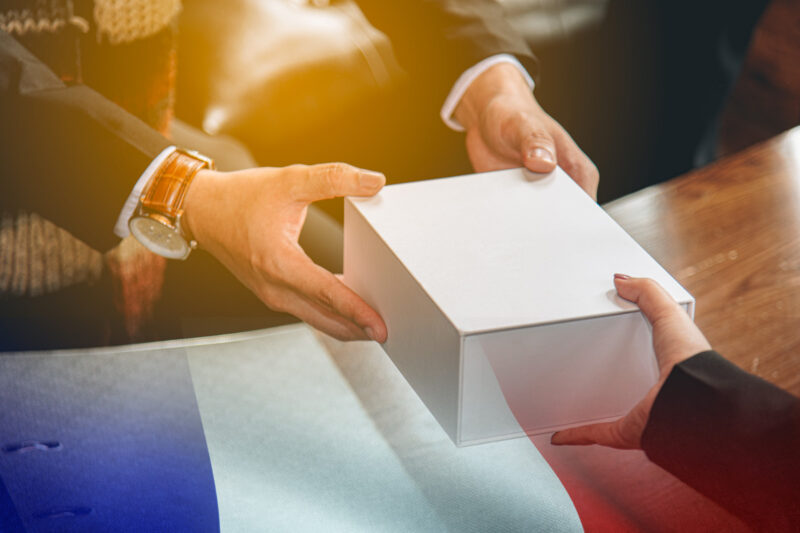 It is not uncommon for a business corporation (subject to income tax or corporation tax) to make gifts (of any kind or “business gifts”) at the end of the year to thank its clients.

These gifts are deductible expenses for this company as recalled in point 5 of article 39 of the CGI (French General Tax Code) which states that: “The following expenses are also deductible: (…) Gifts of any kind, with the exception of low-value items specially designed for advertising”.

However, this article specifies that these expenses are deductible from the company’s profit and loss account if they have been spent in the interest of the company, and their amount is not excessive. It should be noted that it is not required that the gift be of a lawful nature.

The expenses listed above may also be reinstated in the taxable profits insofar as they are excessive and insofar as it has not been proven that they were incurred in the direct interest of the company.

It should be noted that the mere fact that the expenses have not been spent in the company’s interest is sufficient to allow their reinstatement, even if the amount of these expenses is not excessive. The judges of the Conseil d’État accordingly ruled to this effect in a decision dated 11 February 2011 (Decision no. 316500).

In this decision, it was recalled that these expenses are only deductible if the company justifies their interest with regard to its present or future activity or the need to maintain good relations with the recipients of the gifts. The nature of the interest for the company is therefore essential to allow the deductibility of these expenses for the company.

It was obviously recalled in this decision that the tax authorities had the possibility to demonstrate that an expense made was excessive in relation to the interest that the recipient of the gift would have represented for the company. In these cases, the expense is not in the interest of the company.

Nor is this type of expense in the interest of the company when the amount of such expense exceeds the amount of taxable profits (BOI-BIC-CHG-40-60 §20). It is not impossible that the tax authorities will take an interest in this, in particular through the notion of an abnormal act of management.
In this type of case, the company will have to justify that these expenses were necessary for the company.

The fact that the tax authorities may ask a company to justify expenses as defined in article 54 quarter of the CGI, results from a provision of article 33 of Annex 2 of the French General Tax Code.

This article provides that: “The authorities may ask the company to justify that the expenses referred to in Article 54 quarter of the French General Tax Code are necessary for its management:

Therefore, if the gift made is justified since it is in the interest of the company and is not excessive, it may be deductible, regardless of whether it is lawful or not.

Initially making a gift whose cause was not lawful was prohibited by the judges, a previous case law of 1959 had exposed this fact (CE dated 27 November 1959, no. 44826). This criterion was subsequently dropped in a decision dated 11 July 1983 (CE no. 33942). The tax authorities only have to check whether these expenses were made in the interest of the company, even if these expenses are not lawful (ultimately it is the same theory as the normal act of management, sometimes acts are unlawful but in the interest of the company, therefore they are not considered as abnormal acts of management).

This article 4 J of Annex IV of the French General Tax Code provides that: “Companies conducting an industrial or commercial activity and subject to income tax on the basis of their actual profits as well as companies liable to corporation tax are required to provide, in support of the tax return for each financial year, a detailed statement of the categories of overheads provided for in article 54 quarter of the French General Tax Code when such overheads exceed, for one or more of the said categories, one of the following figures: (…) 4. €3,000 for gifts of any kind, with the exception of items specially designed for advertising and whose unit value does not exceed €69, including all taxes, per beneficiary”.

The BOFIP (administrative doctrine) has also specified in paragraph 100 et seq. (BOI-BIC-CHG-40-60-20) that this detailed statement should be produced with the tax return.
It was clarified that:

A special case concerns low-value “promotional gifts”, such as samples offered by companies. These expenses are deductible from the company’s profit and loss account, as stated in paragraph 250 of the BOFIP (BOI-BIC-CHG-40-20-40).